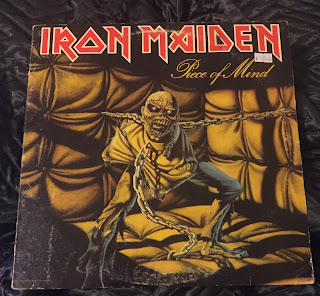 Iron Maiden was founded in 1975 by bassist Steve Harris. The band released two albums with their original singer Paul Di'Anno; Iron Maiden (1980) and Killers (1981). These albums were a different sound for the band compared to their later albums, as they had a much punkier feel, especially in Di'Anno's vocals. Both of these albums are masterpieces, and are among my favorites in the metal genre, but Di'Anno was released from the band afterwards. In 1982, Maiden released the album Number of the Beast with their new frontman Bruce Dickinson. The transition of singers was seamless, and while Di'Anno and Dickinson had very different sounds, they were both able to stand alone as amazing frontmen for the band. In 1983, the second album with Dickinson, Piece of Mind was released. The album marked the first appearance of Nicko McBrain on the drums, as a result of Clive Burr's departure from the band. Topping Number of the Beast was a tall order, but in my opinion, they did with this album. The music got heavier, the lyrics were amazing as usual, and some of my favorite tracks by the band are featured. Finding used Iron Maiden vinyl (I don't buy 180g reissues) has been near impossible for me for years now. I found a copy of this album about a week ago, and it was my first by the band in my collection. I have listened to all of the band's albums many times on CD's and streaming, but I have to say listening to it on vinyl was a game-changing moment for me.

The album starts off with the classic, "Where Eagles Dare". From the legendary opening drum fill on, this song is one of the band's heaviest and most mesmerizing tracks in their catalog. The lyrics are powerful as they use eagles as a metaphor for bomber planes in the war. They are very direct, but also poetic in a sense. Dickinson comes in strong with this track. He has a very aggressive delivery, and it is easy to feel the passion and emotion as he sings the lyrics. For me, the strongest aspect of the song is the rhythm section of Steven Harris on bass and Nicko McBrain on drums. The machine gun bursts of the drums adds so much appropriate chaos to the track, and Harris' bass lines create a triumphant groove. It is definitely a shining moment for the both of them.

"Revelations" is an interesting track that doesn't get talked as much about as much. It has a lot of variation in sound throughout. There are moments of the classic Maiden heaviness, but there are also mystical sections that calm down with clean guitar riffs and a more gentle performance by Dickinson. It is a very progressive track, and it even reminds me of Rush at times. I love the section of the song after the guitar solo where the riffing gets heavier than ever. It becomes quite chaotic, and then transitions back into the main riff seamlessly.

My favorite track on this album has always been "Flight of Icarus". The chugging riff is instantly captivating, and is pretty heavy in a unique way. The song is slower than a lot of tracks on the album, and while that has been a point of criticism by some, I think it is a great change of pace.  Dickinson sounds better than ever on this song. My favorite part of his vocals on the track is the chorus. The notes he hits harmonize so well with the chords, and there is a sadness in his delivery. I love the lyrics too, as they show the bands love for mythology and legends. In a time where the majority of popular rock and metal groups were singing about girls, these guys were out there singing about Icarus, fantasy, and the war. I admire them for the bravery to be different.

Side one ends with "Die With Your Boots On". This is probably my least favorite track on side one, although I still love it. It is a fast, heavy, and aggressive track. I think the only reason that it is my least favorite on the side is the chorus. It's a lot of fun, but it feels a lot more mainstream than the others. The song still has amazing guitar playing by Adrian Smith and Dave Murray (maybe even some of the best on the album), a great rhythm section, and a great performance by Dickinson.

Side two thunders in with the most popular track on the album, "The Trooper". This is one of the guitar songs on the album. The opening riff is legendary, and has been a favorite of many guitar players that have come after. The melodic twin guitars are very memorable on this track, and it is hard not to sing the lead lines throughout. The verses are headbangers without a doubt. There are driving power chords, kick ass vocals by Dickinson, and another example of what a fire rhythm section that the band has. Even though the song is a staple of classic rock radio, it has not overstayed its welcome. It isn't my favorite track on the album, but I can't help but love it even after hearing it hundreds of times.

The rest of side two is also strong. Some of the standouts for me are "Still Life" and the closer, "To Tame a Land". The latter has one of my favorite Maiden riffs. It is so chuggy and heavy, and has me banging my head instantly. I love the lead guitar throughout the song too. The melodies sound very exotic, and they led the track to be the most experimental on the album. The second half of the song reaches new heights guitar wise, as the riffs become heavier and the solos even crazier. It is definitely my favorite guitar playing by Smith and Murray on the album, and one of the top guitar tracks from the band's catalog. The rhythm section really gets to show their chops in this one. There is a whole breakdown part where the bass is the prominent instrument. It becomes super atmospheric, and it is capitalized by some wonderful drum fills. As mentioned throughout this review, Dickinson once again brings it on home. His phrasing is very interesting on the verses of this song, and he hits some stunning high notes. This is one of my favorite tracks on the album for sure, and it was a very powerful way to end such a solid album.

Piece of Mind had every opportunity to disappoint audiences. It was the first album to not feature Clive Burr, whom was one of the most interesting drummers in the New Wave of British Heavy Metal. It also was the album that followed Number of the Beast, which is one of the most iconic metal albums of all time. Piece of Mind exceeded expectations though. It is a very mature album that features a lot of solid heavy metal tracks. The band was on fire, and McBrain was a perfect addition to the band. While it is hard to choose, this is my favorite album by Iron Maiden. Their run in the 1980's was unmatched by most metal bands, but I see this as the strongest offering that they ever put out.

Standout Tracks:
"Where Eagles Dare", "Flight of Icarus", "The Trooper", and "To Tame a Land".