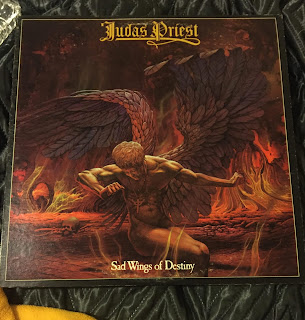 Most music aficionados will consider Black Sabbath to be the first band to create the blueprint of metal/doom metal music. This is something that I will not deny. I do feel like the first band to take that blueprint and use it to invent heavy metal was Judas Priest. Their underrated 1974 album Rocka Rolla was still more hard rock than anything, but in 1976, they established a genre with their masterful album Sad Wings of Destiny. The album had some of the bluesy and progressive elements of their previous effort, but much less so. This album focused more on screaming vocals by the 'Metal God' Rob Halford, metallic and aggressive guitars by KK Downing and Glenn Tipton, and dark lyrics that became the standard for the genre. The album was a hit with critics right off the bat, but it didn't get much traction with mainstream audiences until later on. It is definitely one of my favorite albums by the band. It has some of the strongest tracks of their career, and it showcases the rawness of early Priest that I love better than any of their other eras.

First impressions are important with an album, and Sad Wings of Destiny nails this in many ways. For starters, the album cover by Patrick Woodroffe is absolutely beautiful. The artwork hasn't aged at all. It could fit on any modern metal album, and is definitely one of my all time favorites. I love the detail of the flames in the background, and the color scheme is magnificent. Secondly, the album's opening track "Victim of Changes" is one of the greatest metal tracks in history. Running almost eight minutes, this song is truly epic. There are powerful guitar riffs, great lyrics about a failing relationship with an alcoholic girlfriend/wife, and more than anything, one of Halford's greatest vocal performances. The second half of the song is where Halford's chops are fully showcased, as he screams in operatic proportions. This phase of the song begins with a breakdown. This is probably my favorite part of the song, because of how eerie it is. Halford starts it by showcasing his lower vocal register, and is much more gentle as a contrast to his aggressive delivery throughout the rest of the track. This part of the song toys with the listener. It is inevitable that the song will pick back up, and the breakdown stays a bit longer than expected. This pays off once the song amps up again. Halford reaches new heights in his performance, and becomes haunting with his high register wailing. By the time that the song wraps back to its main riff, the journey is bound to blow the listener's mind. The final scream at the end of the song makes my jaw drop, and the hairs on my arm raise. It is a defining moment in metal, and I can't say I've ever heard anyone recreate it.

With such a great start, it would've been easy for the album to fade away in its 40 minute run time. This is not the case. There is no bad tracks on this album. It's hard to say that there are any moments that feel weaker than others. Tracks like "Ripper", "Tyrant", and "Genocide" are top-notch headbangers that set the forefront for what Judas Priest had to offer. "Deceiver" shows the band's love for Sabbath in its doomy riff. "Dreamer Deceiver" is a haunting ballad that showcases some more haunting screams by Halford in another one of his most impressive vocal performances. If there was one track that felt at all out of place to me, it would be "Epitaph". I still enjoy the song, as it is another beautiful ballad. It sounds a lot like a nod to Queen (Halford was a fan of the legendary band since their beginning), and while it is a good one, I feel like it was jarring on such a heavy album. "Island of Domination" is a perfect album-closer. Its chuggy riff drives the song, and it is a powerful end to one of the greatest metal albums of all time.

Sad Wings of Destiny is a mind-blowing album. It is practically flawless. It is an album worthy of many listens, and is an essential for any fans of metal. It is hard to choose a favorite Judas Priest album, but I can say for sure that it is up there for me.

"Victim of Changes", "Dreamer Deceiver", "Tyrant", and "Island of Domination".