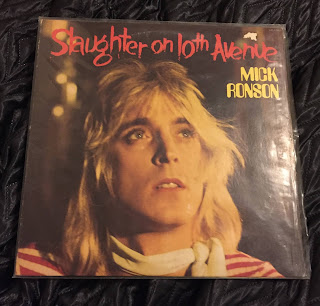 Mick Ronson was one of the most talented musicians that doesn't get talked about in rock. Most famous for his work with David Bowie, he also worked with artists like Ian Hunter, Mott the Hoople, and Lou Reed, amongst others. On top of being a talented musician (especially on guitar), he was also amazing at arranging songs, which is what this album is all about. Slaughter on 10th Avenue was Ronson's debut solo album, and it was released in 1974. He only had writing credits on two of the album's tracks, but he arranged and produced the entire album. He had help from his colleague David Bowie (Bowie penned a couple of the tracks), and there were also a couple covers. The album is not perfect, but it is a great solo endeavor of an underrated talent.

The album starts off strong with a cover of Elvis Presley's classic "Love Me Tender". When I saw this on the back of the album, I got nervous before my first listen. Surprisingly, the cover does the song justice, while giving it a very new take. Ronson starts with low vocals that sound closer to what Presley did with the song, but he quickly jumps into his higher register. Vocally, Ronson reminds me a bit of a mix of Freddie Mercury and George Michael. He gives a much more dramatic performance than Presley, and the passion bleeds through the record player. The guitar tone and piano sound pretty great too. His soft strums at the beginning fit the old time feel of the original song. After about a minute, the song kicks in with distorted guitar, drums, and bass. It is a very emotional listen the rest of the way through. There is a tasteful guitar solo by Ronson about halfway through, which is followed by the chorus until it fades. Overall, I was extremely impressed by this cover. It was able to fit the 70's sound without being cheesy, and it still did justice to the original.

The next track is "Growing Up And I'm Fine", which was penned by Bowie. This song is tricky for me. It has grown on me as I have listened to the album more and more, but it definitely has some cheesiness to it. The instrumentation is beautiful. It is very piano heavy, especially during the verses. While the playing itself is great, the sound is a bit off in these parts. The piano sounds a bit more distorted than I'd like it be, especially for how high the notes are. It causes the playing to sound too thin, and it lacks the depth that it could potentially have. The chorus adds bass, drums, and guitar, and tends to be my favorite part of the track. I think the song needed the extra instruments to fill the song out, so it doesn't sound as weak as it does in the verse. Ronson's vocals are wonderful on the song. His phrasing sounds a bit like Todd Rundgren on one of his quirkier tracks, and there is a very playful tone. While this track is flawed, and a bit dated, I still enjoy it for the most part.

One of my favorite tracks on the album is the Ronson penned classic, "Only After Dark". This is definitely the heaviest track on the album. It begins with some thunderous open chords, and once the song kicks in, it has a hard-rocking groove, a great riff, and great guitar tone. Ronson sounds a lot like Bowie in his vocal performance, and I enjoy that a lot. There is some cool instruments used throughout the song, including what sounds like a shaker. The backup vocals also add a cool touch to the song, and succeed in not being cheesy.

The next song is "Music is Lethal". The track was originally by Italian singer/songwriter Lucio Battisti, but the English lyrics were written by Bowie. Just like "Love Me Tender", this song succeeds as a really beautiful cover. The verses are acoustic, melancholy, and feature sad and gentle vocals by Ronson. It never comes off as cheesy, and he sounds quite a bit like Bowie again. The instrumentation sounds like something that would be played in a classic Italian song, and I appreciate Ronson for arranging this cover to sound true to the source material. The song does kick in for the chorus, and I absolutely love it. He sounds even more like Bowie vocally, and the build in the instrumentation is so gradual that once it reaches the peak it feels so rewarding and justified. The transition back into the soft verse is seamless, and so is the build back to the more powerful chorus. The song finishes strong with thunderous drum fills, distorted and melodic guitars, and a triumphant tone. This cover was a brilliant addition to the album, and was one of the standout tracks.

Side two starts with a fantastic cover of "I'm the One" by Annette Peacock. The first half of the song sounds like a dark acid-trip through Broadway. It is chaotic, theatrical, and it features some fantastic guitar playing by Ronson. The piano lines are catchy and jazzy, and they add sleaziness to the overall sound. The song shows its true brilliance when it slows down. I visualize the second half of the track as a seductive performance in a cabaret club. Ronson's vocals are stunning. His runs go over all the place, he uses falsetto beautifully, and he even begins scat-singing. The brass in the background adds to the jazziness, and makes the song even more emotional. This may be the standout track on the album, and it is a magical achievement.

"Pleasure Man/Hey Ma Get Papa" is a nine minute medley that Bowie and Ronson both have writing credits on. It's dark, atmospheric, and has fantastic instrumentation the entire time. Even with its long run time, it doesn't overstay its welcome. There are guitar ear-piercing guitar solos over the song, Ronson nails it vocally, and the bass lines are badass. The second half of the song gets a lot more avant-garde, and it is easy to hear Bowie's influence on it. There are trippy synths, noisy effects, and the vocals sound exactly like Bowie. It sounds a lot like something Bowie and Ronson would've done together as Ziggy Stardust and the Spiders From Mars.

The album finishes strong with the jazzy and experimental instrumental "Slaughter on 10th Avenue". It is a cover of a ballet by composer Richard Rodgers. All of the instrumentation is fantastic, especially when it gets chaotic. The highlights are the lead guitar playing and the piano. It feels like proper closure to a fantastic album, and avoids being cheesy.

Slaughter on 10th Avenue is a solid solo endeavor for Ronson. Solo albums can be iffy, especially for a guitarist, but he really showed that he can hold his own. The arrangements are fantastic, he proved to be a wonderful vocalist, and all of the songs are enjoyable. All of the tracks on side one are great, but they feel less like a coherent album than side two (which flowed seamlessly). I do see this as a minor weakness, but it is nothing too detrimental. The only track that had any significant flaws to me was, "Growing Up And I'm Fine", but that was due to production rather than the songwriting itself. I would definitely recommend this album to fans of Bowie and of rock music in general. It is a hidden gem of the 70's, and there is a lot to enjoy about it. Rating: 8/10

Standout Tracks:
"Only After Dark", "Music is Lethal", "I'm The One", and "Pleasure Man/Hey Ma Get Papa".