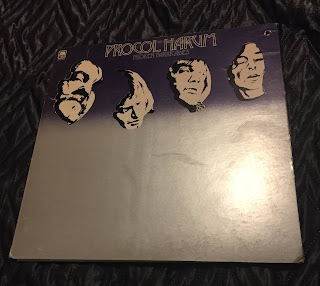 Procol Harum is best known as the band that performed the 1967 classic "A Whiter Shade of Pale", which has been a staple of psychedelic rock for decades. While the band is a one hit wonder to many, that isn't the case for anyone who has dug into their catalog. They are a band of many sounds, and a lot of awesome albums. Released in 1971, Broken Barricades is one of their hardest rocking efforts. It was the last album to feature their criminally underrated guitarist Robin Trower, until he returned once more in 1991 for the album The Prodigal Stranger. The album has a lot of great tracks, and features a raw and heavy sound that was different compared to the band's other albums.

The album starts with the rocker, "Simple Sister". This is a badass track in for many reasons. The guitar riff is distorted, muffled, and bluesy. The tone of the guitar, along with the heaviness of the riff sounds like an early version of doom metal. I expected the guitar to become heavier, but a chuggy piano riff by Gary Brooker (vocalist/pianist) came in, along with his vocals. Brooker's singing is very soulful as always, and he fits the song perfectly. B.J. Wilson comes in at the same time on the drums, and he absolutely smashes. I think the song hits its peak once Trower begins his guitar solos. The tone of his lead sounds similar to Hendrix, and so does his playing. He hits screaming bends that put me in a trance, and he has so much emotion in his playing. The solo is followed by a great piano breakdown. The thing I love about the piano on this song/album is how heavy it is. The sound is so thick, and it is adopted perfectly as an instrument for a hard rock album.

"Broken Barricades" is the second track of the album, and it is a softer song than its predecessor. The music is hypnotic, especially the beautiful organ playing by Chris Copping. Even though the song is soft, Wilson still bangs on the drums like there's no tomorrow. He was honestly one of the most underrated drummers. His skill was out of this world, and so was his sound. Brooker's vocals are beautiful on this song. They start gentle, but his raspy soul comes out and steals the show. This track was a huge shift from the heaviness of "Sweet Sister", but it fit perfectly. It is a sign of the diversity that is to be seen on the rest of the album.

The third song on the album is "Memorial Drive". This song is straight blues-rock, but the thick organ leads it to sound like an upbeat Deep Purple song. There is a cool guitar riff, good vocals, a funky bass line, and amazing drumming. The best part of the song is when the guitar chords and the drums become chaotic as the song reaches its end. It is a great little moment of jamming, and it shows the chops of the group. The song is not as memorable as the past two tracks, but it still rocks.

"Luskus Delph" is the final track on side one, and it is another ballad. The song is deceiving, because at the start it sounds like it is going to be more of what we heard with "Broken Barricades", but it has its own quirks. There are odd time signatures from the drums, beautiful string arrangements, and a gorgeous vocal performance by Brooker. Procol Harum is known best for a symphonic rock sound, and this track was a perfect example of what they know best. It is a great closer to the first side, and it leaves the listener eager for the second half.

Side two begins with "Power Failure". Right off the bat, the drumming on this song is insane. The rhythm is highly eccentric, and their are a lot of fire fills. The vocals are dominant on this track during the verses, and they are very catchy. The song gets interesting to me when the breakdown happens. There are subtle and choppy attacks from the guitar and bass, but the drumming takes the spotlight. This song has the perfect balance of the rockers and the softer songs on the album.

"Songs For A Dreamer" was written by Trower and the band's lyricist Keith Reid as a tribute for his late friend Jimi Hendrix. The song is very trippy, and it instantly put me in a trance. The guitar takes the spotlight, which is appropriate for the subject matter. The solos are very cathartic, and the reverb drenched notes made me feel like I was in a dream land. The drumming is dark and atmospheric, and the fills feel like they are running across the air. Trower's vocals are very dreamy, and the effects on his voice remind me of Ozzy Osbourne's on "Planet Caravan" (which came later). This is definitely one of the standout tracks on the album, both for its sentimental nature of the lyrics, and for the mystical sounds of the instrumentation.

The third track on side two is "Playmate Of The Mouth". This song is one of the more psychedelic tracks on the album. It has acid-drenched guitar solos by Trower, a brooding piano riff, menacing vocals by Brooker, and an overall unsettling feeling. I like this track, but it is definitely one of the less memorable on the album. The highlight of it is definitely Trower's guitar playing, which is mind-blowing the entire time.

The final track on the album is "Poor Mohammed". This one has Trower back on vocals, and he sounds pretty good. He gives a raspy performance, which fits the heaviness of the song. The guitar playing is badass on this track. It sounds like he was using the slide, which gives it a very trippy and unique sound. The guitar solo at the end of the song is the highlight of the track. The distorted tone penetrates the mind, and it is some of the most aggressive playing on the album. The overall groove of the song is very cool, and it is helped by the cowbell in the background. I honestly wish this song was somewhere in the middle of the album, rather than the closer, because while it is a very strong track, it felt like something should've followed it.

Broken Barricades is probably my favorite album I've heard by Procol Harum thus far. There are a lot of different sounds on it, including hard rock, progressive rock, symphonic rock, and the blues. The band is able to adopt all of these different sounds seamlessly, and the result was a lineup of songs that ranged from very good to great. There were definitely moments that were better than others, but I never felt that a song was anything less than enjoyable. This is a truly underrated album by a band that deserves more credit, and I would recommend it highly. Rating: 8/10

Posted by Ryan Gavalier at 7:47 PM