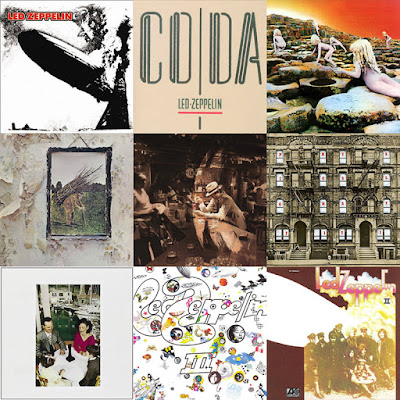 Hey everyone! About a week ago, I finally completed my Led Zeppelin studio album collection. The last one that I needed was Led Zeppelin III, and I was lucky enough to find it at my job. Ranking the studio albums of Zeppelin is an extremely hard feat. I would dare to say that there is not a bad album in the catalog. The bottom two are definitely obvious for me, even though I still enjoy them both. Feel free to put your own rankings into the comments, as I would love to see what others think.

Coda is the final album that Led Zeppelin released. John Bonham had passed away two years before, so the album was mostly outtakes and unreleased live tracks. The album isn't necessarily bad, but it just lacks the flow of a coherent Zeppelin album. Some of the tracks like "We're Gonna Groove" and "I Can't Quit You Baby" are pretty cool though.

In Through the Out Door was the final album for Zeppelin to release while Bonham was still alive. It was quite a departure from the sound of Zeppelin's previous albums, and was a bit poppier. Even though it is pretty low on my list, I still like it quite a bit. "In the Evening" is one of my top Led Zeppelin tracks, and "All My Love" is a beautiful ballad that vocalist Robert Plant wrote for his late son. "Fool In the Rain" was hit material, and "Carouselambra" is also a pretty badass track. All in all, this album is not bad, but there was just something missing in the production for me. The album was not as aggressive as past albums, and I missed the rawness of Zeppelin's sound.

7. Led Zeppelin II (1969)
I know this is probably the ranking that is going to piss a lot of people off. Honestly this spot was where the list got really hard for me, because the rest of the albums starting with this one are just about equally as good as each other for me. Led Zeppelin II is a monster of an album, and it avoided the sophomore slump trope completely. Just about every song on the album is badass, and it even has some of my favorite tracks, including "Bring It On Home", "What Is and What Should Never Be", and "Ramble On". I think the reason why this one is so low for me today is that it is the album that I grab the least. I end up enjoying it thoroughly every time that I do give it a listen, but I feel more driven to grab the other albums that are coming up more.

If I had to choose the most underrated album by Led Zeppelin, I would probably have to go with Presence. I absolutely love this album. "Achilles Last Stand" and "Tea For One" are two of my favorite Zeppelin tracks. The former being a complex, driving hard rock epic, and the latter being a brilliant follow up of sorts to "Since I've Been Loving You". Some other standout tracks on the album are "For Your Life", "Nobody's Fault But Mine", and "Hots On For Nowhere". I do like every track on the album, and I would rank it higher if the other albums weren't so immensely good.

It's safe to say that Led Zeppelin was blessed with one of the best debut albums of all time. Entering the world of music with tracks like "Good Times Bad Times", "Babe I'm Gonna Leave You", "Dazed and Confused", "Your Time Is Gonna Come", "How Many More Times", and "Communication Breakdown" is an amazing feat. Even the other tracks like "You Shook Me", and  "I Can't Quit You Baby" are wonderful blues tracks. This is another album that I love front to back, but I think that the reason it still ranks pretty low for me is that it doesn't feature as much original songwriting as other albums. Zeppelin was still finding their sound at this point, and I think they would mature a lot more on future albums.

Putting this album at fourth place on any list is painful for me, but it had to go somewhere. "The Rain Song", "No Quarter", and "The Ocean" rank up there in my top Led Zeppelin songs, and there are so many other great tracks that accompany them on this album. I love that the band experimented with a lot of different genres on this album. There was reggae in "D'yer Mak'er", funk in "The Crunge", and slight prog elements in "The Song Remains the Same" and "No Quarter". This album would be a valid #1 pick on any list, as would any of the albums I've been talking about, because it is hard rock at its finest.

3. IV (1971)
Led Zeppelin's untitled fourth album boasts some of the most popular songs in the rock genre. A lot of people will call it their overplayed album. While I never need to hear "Rock and Roll" again, I happen to love everything else on the album. "Stairway To Heaven" may be their most popular song, but it is for reason. I love how the song takes its time to kick in, because once Bonham's thundering drums arrive, it is impossible to not play along with them. The band was on top of their game for that track, and it is definitely in my top 10 by the band. Some of my other favorite tracks on the album are "The Battle of Evermore", "Misty Mountain Hop", "Black Dog", and "When the Levee Breaks". The album is good front to back, and its influence on music is undeniable. I believe that this is the album is where the band found their defining sound, and it is stunning to say the least.

Led Zeppelin's third album was initially one of their most polarized. A lot of people thought it was too folky, but I think that is part of the album's strength. As a whole, I think this is one of the band's most diverse albums. It features some of their heaviest songs like "The Immigrant Song", "Out On the Tiles", and "Celebration Day" (maybe my favorite rocker by the band). There are some great folk moments like "Gallows Pole" and "Friends", and some beautiful ballads like "Tangerine". This album took a couple listens to really sink in for me, but it is probably the second most likely album by Zeppelin for me to grab when I want to listen to something by them. It is a fascinating effort by the group, and probably their rawest album after the first two.

Double albums can be exhausting, but that is one word that cannot describe Physical Graffiti. If someone asked me to choose an album to introduce Led Zeppelin to them, it would be this one. Even with its massive length, I can't think of a moment of filler throughout the whole thing. Songs like "Ten Years Gone" (my favorite ballad by the band), "Houses of the Holy", "In My Time of Dying", "The Rover", and "Kashmir" blow me away. They are tracks that I can't even fathom the creation of. Other standouts include "Down By the Seaside", "The Wanton Song", "Trampled Under Foot", and "Custard Pie". If Led Zeppelin found their sound on IV, they perfected it here. This is definitely one of my favorite rock albums of all time, and it is my favorite by Led Zeppelin.

I hope that you guys enjoyed this list. It was definitely a hard one to put together, because ranking Zeppelin albums is nearly impossible. As I said before, feel free to add your rankings in the comments, and also feel free to list other bands you would like to see rankings of. I hope that you all are staying healthy right now, and I look forward to putting out more articles for you!


Posted by Ryan Gavalier at 9:43 AM No comments: